I’m celebrating an anniversary this month! On February 1st, 2016 my first cover and centerfold shoot for Penthouse hit the stands worldwide.

I had already been shooting features and editorials for them for about a year, when I was told that I was chosen to shoot the Penthouse Pet of the Month.  I was excited to hear from Penthouse Creative Director Angela Derasmo (my wonderful pizza partner in crime) that the theme for the shoot was going to be “Valentine’s Fetish.” I decided that rather than simply go the obvious fetish routes, I would instead imply that our model had a fetish for all things Valentine, with an emphasis on hearts, mixed in with a sprinkling of kink/fetish themes.

Darcie Dolce was set to be the February centerfold.  She embraced the concept with enthusiasm, and was fantastic to work with.  Although this was of course going to be a very risque shoot, we still gave a lot of thought to fashion. Both Syren and Jane Doe latex graciously provided heart themed latex for the shoot, Stockroom stocked us up with “whips and chains,” and after a few days scouring downtown LA’s fashion district for heart shaped rings, earrings, accessories, and shoes we were ready with a plan.

Our shoot took place in a gorgeous mansion in the Hollywood Hills.  When I first scouted the location I really loved its spacious modern vibe, but what really sold me was a big red lip-shaped couch I found outside by the pool.  I knew this would be great for Darcie to pose on, and our first set was outdoors by the pool on that couch.  Darcie wore a red latex cropped biker jacket from Syren, red stiletto heels, heart shaped sunglasses, and a big sparkling red heart with “Forever” emblazoned across the front in gold and black.  My instincts must have been right-on about the couch, because the photo chosen for the cover of the magazine was only our 10th shot in from this set!  One of the two centerfolds was chosen from this set as well, but we had more to shoot inside the house. 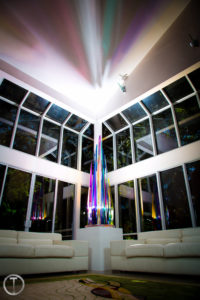 There was a striking glass sculpture in the living room with tall colorful shards of glass reaching up to the ceiling. I added a strobelight at the base to bring out the colors in the glass and it came alive.  We dressed Darcie in a pink and red latex hobble dress from Syren which had a heart shaped cutout low in back.  It fit her like a glove and she posed with a steel riding crop from Stockroom which had a red heart at the tip. 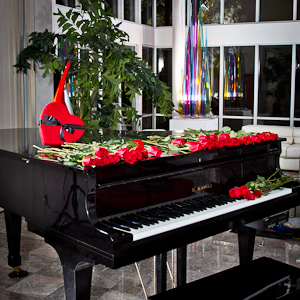 Another set was shot by a piano with Darcie in a special Valentine latex lingerie set designed by Jane Doe. I ordered a delivery of four dozen roses to arrive on the day of the shoot, to lay all about the piano, and I also dressed the set with a beautiful red velvet box for chocolates and a martini glass with a red liqueur to catch the light. (ssssh, the “liqueur” was flattened strawberry soda from the dollar store!)

Next was a light bondage theme on a modern chrome and white leather “Wassily” chair, using red bondage tape. Darcie wore red patent leather thigh high stiletto boots, a red heart choker, and plenty of attitude!  Later, we moved upstairs to the bathroom to shoot a set in both the tub and the shower.  I particularly liked the shower in this house because it had a glass window looking outside. I knew I could place a strobe outside and face it in through the window, and that the water droplets would catch that light and shine like colored gems.  We started out with her dressed in Syren’s “Heart Candy” dress, c

ustom made specifically for our shoot, which she would strip off in the shower.  She was a real trooper on this one, because the water was barely luke warm – otherwise it would steam up the lens and ruin our shot!  Then afterward, our fantastic makeup/hair artist Melissa helped set up the bubble bath (almost falling in!) and we finished off with Darcie taking a bath in spike heels (doesn’t everyone?), and headed home with some great sets under our belts.

After the shoot, Darcie and I decided to shoot some extra material at my home studio the next day.  These are the more romantic, pure white photos with the single red rose shown below. I also wanted to try a cover concept I had, with a large red silk heart placed over her body. For that shot Darcie laid flat on her back and we strategically placed the heart shaped silk over her; the camera was controlled remotely while mounted directly above on a crossbeam. Makeup and hair for that day was provided by Roberto Sotello, and his lovely wife stitched our silk heart!

Special thanks to Darcie, Marc, and everyone involved. These are a team effort, including my stalwart assistant Feenix who makes sure everything stays in focus (including the photographer!) And special thanks also to everyone at Penthouse; I’m very proud to be included in their elite list of dedicated professional shooters, including founder/editor Bob Guccione, Ken Marcus, and Earl Miller.

Following are screenshots of the magazine, all the published photo files, and additional photos, ending with some of my alternate cover demos which can only be seen here.

(Click to enlarge images, links on the fashions worn in this shoot below)

For more info on the specific fashions used in this shoot:

PARTY! Photos from our issue Release Party in L.A.